: Training parameters and their benefits

The overall volume at given intensity has to be as big as possible. One repetition at 95% intensity will do strength, but one at 80% will not do hypertrophy.

If you want to be a complete athlete, it's good for you to keep balance in your strength, strength endurance and pure endurance abilities. In other words, if you can do one repetition at your 1RM intensity, 5RM at 87%, 10RM at 75%, 15RM at 65% and 100RM at 30%, then you are good. Note: do every test in a different day, to be fresh for a repetition maximum. 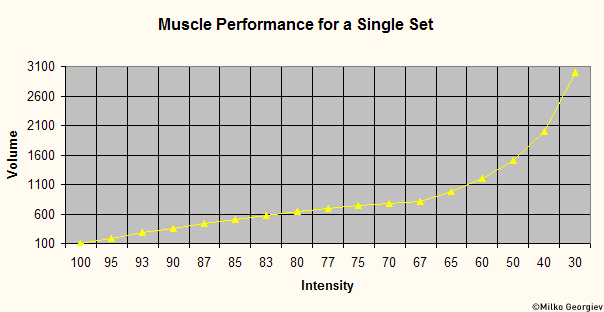 Absorb what is useful! : Bruce Lee

Strength is a skill.

Strength is an asset, you can invest in any athletic ability. : Milko Georgiev 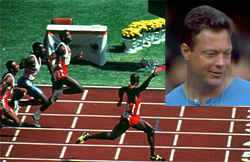 You are better to slightly under train than over train.

How do you mentally prepare for an important race? By having adequate and appropriate preparation and training.

Athletes should never be sore from training.

I question the need for high GI intake post workout and I believe it is better to keep insulin at flat level.

Tryptophan can be blocked by using Tyrosine as supplement (casein -- cheese) or with a high protein diet. This slows down Ph change.

Zig zag type drills are detrimental to performance due to stretching of the ankle region.

Over time (after year 7) the volume MUST drop. This is both total volume and the number of max sessions. This is where many go wrong they either keep increasing or level it out, it must drop to continue progressing.

The higher the level of the athlete the less need to change the weights program. Don't be afraid to keep it simple. Some weight sessions were only 20 minutes long.

Do not do single leg plyos as the risk of injury is just too great, there are coaches who advocate that work and have had numerous achilles injuries as a result.

Don't worry too much about strength discrepancies between legs.

Box squats present too much risk of injury, you are standing with a heavy weight on your back then sit down on a box, release the hips and try to get up… leave it to the powerlifters.

Get things right at slow speeds then only increase speed when the technique is correct.

When the hips are high and running at top speed the hamstrings and quads are not in conflict and are working as one due to the force coming from the hip like a pendulum. This can only be achieved with adequate hip height and is called Lombard’s paradox.

In fact a bilateral squat was much closer to these movements (running to cut, backpedal and cutting to the left) than a single leg squat.

It is also becoming clear that the body adapts best to a relatively constant workload which minimizes adaptation stresses.

Mesocycles of 3 weeks of intensification and 1 week of consolidation have the widest overall application.

Remember, there's a lot of strength endurance involved in sprinting, so Ben's 1RM squat wouldn't be as high as a shotputter who could handle the same 6RM.

A large volume of high intensity lifting will certainly compromise your top speed.

400 meter dash is about as tough as it gets and those of you who've puked at the end of one of these races may be surprised to learn that the race itself burns only about 50 calories!

I don't like the sound of your ham/quad ratio test. It sounds like you've been assessed and rehabbed on a Cybex or Orthatron machine. In all my years of experience, I've never run across a happy result with this kind of equipment.
First of all, the basic premise that you can assess ham/quad ratios, as they apply to sprinting in this way, is bullshit. Since the rate of movement around the knee during ground contact (when real force is needed) approaches zero, then the unloaded rate of movement can approach 1500 degrees per second! Let's see a machine test that!
Secondly, most hamstring injuries are caused by overwork, not an imbalance. What happens is that as you fatigue, the hip height during sprinting drops, causing more deflection at the knee than there should be. Therapy with these machines is, unfortunately, the rule and not the exception these days. The fluid resistance these machines rely on comes on all at once. It's like cracking the whip with the hamstring.
The muscle will go into more spasm, shortening it's length and sending the problem up into the Ischeal Tuberosity. Of course, your therapist will explain this away as sciatica (a narrowing of the lumbar or cervical spinal canal, which causes compression on nerve roots). Only manual therapy such as cross-friction or Active Release Technique will solve the problem.
I was once called in by an NFL team to assess the injury to their star receiver. It turned out that he'd been on the Orthatron for a year and the harder he worked, the worse the hamstring got. Finally, he missed a full season! Once proper therapy was instituted, he came back for a dream season. I should also point out that hamstring injuries in football players cannot always be avoided because they often occur during intense deceleration, something sprinters shouldn't have to worry about. 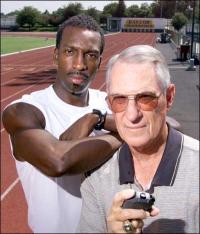 We don't make drastic changes, but we make subtle changes every year.

I train my 400 people today more like I trained my 800 and 1,500 runners 20 years ago. The 400 is a sprint-type event, but it doesn't necessarily have to be trained like a sprint event. The aerobic capacity (in training) is greater in the 400 than people ever thought it was. They thought the majority of it was anaerobic running, and it really isn't.

The race starts at 200 meters. The first 200 sets up the race. You want to hit a certain speed, come through there, and then you make your moves.

I remember Michael asking one time, "Coach, do we want people to know what we're doing?" I said, "Michael, there's no secrets out there. The things you're doing, I stole from somebody else. We refined it, we changed it."
Training programs are great, but you've got to have somebody who's experienced, who knows where to make changes. You've got to be able to interpret it and apply it to your own athletes.

There is no such thing as one Russian system - we have many coaches and guidelines and each coach is allowed to develop his own system. It is the Americans who are so rigid, not us - they want fast foods, fast formulae and fixed programs that are easy to apply.

The human body can (and in case of a purely vegetarian diet often must, unless the aforementioned algae or supplements derived from them are consumed) also convert ?-linolenic acid (ALA) to EPA, but this is much less efficient than the resorption of EPA from food containing it, and ALA is itself an essential fatty acid, an appropriate supply of which must be ensured. Because EPA is also a precursor to docosahexaenoic acid (DHA), ensuring a sufficient level of EPA on a diet containing neither EPA nor DHA is harder both because of the extra metabolic work required to synthesize EPA and because of the use of EPA to metabolize DHA. Medical conditions like diabetes or certain allergies may significantly limit the human body's capacity for metabolization of EPA from ALA. :: Wikipedia

The optimal ratio is most likely closer to the original ratio of 1:1. For most of us this means greatly reducing the omega-6 fatty acids we consume and increasing the amount of omega-3 fatty acids. Please recognize that we get ALL the omega-6 and omega-9 fat we need from food. We do NOT need to take any supplements for these fats. :: Dr. Mercola